New Energy Efficiency Demonstrations for Buildings' (NEED4B) is one of the EU projects carried out by CEEE at Ozyegin University. NEED4B partners include Spanish, Swedish, Belgian, Italian and Turkish researchers. The project aims to develop an open and easily replicable methodology for designing, constructing, and operating new low energy buildings, to be scaled up to a large market acceptance. The project incorporates a strong demonstration program, and has allowed the construction of 17.000 m2 SCOLA Building in the Ozyegin University campus. The energy consumption achieved in SCOLA is around 45 kWh/m2/year compared to 255 kWh/m2/year in typical academic buildings in Turkey. This reduction in energy consumption, which amounts to 82% level, impacts the CO2 emissions, which are reduced more than 90% less compared to regular practices.

The "Energy-Efficiency-Core" Concept for a New Building 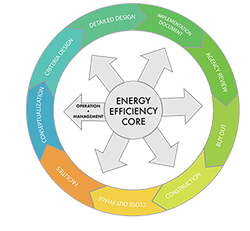 We present a case study to show the importance of the “Energy-Efficiency-Core” (EEC) concept for the design, construction and operation of new buildings. We combined the EEC with an extended “Integrated Project Delivery” (IPD) wheel concept (EEC-IPDW, for short), which is shown to be an effective approach to enable the key design principles to be carried on from the time of inception of a building to its daily operation at the end. Implementation of EEC-IPDW is shown to improve the long term cost of building design, construction, and operation through an intelligent facility management procedure. It is also shown that EEC-IPDW helps to prevent any adverse and unexpected interference from the specialized stakeholders, who, after joining the building at a later phase, suggest changes over the original concepts, including architectural beauty, aesthetics, and the coherent use of the building-integrated technologies. In addition, EEC-IPDW helps to the implementation of the innovative financing of buildings to secure its sustainable construction and operation, beyond the traditional construction phases. In this paper, the EEC-IPDW is explained based on the experiences gained from an on-going EU-FP7 project, NEED4B (New Energy Efficiency Demonstrations for Buildings). The Turkish demonstration site, School of Foreign Languages (SCOLA) has been designed; constructed and is being operated by implementation of EEC-IPDW. In this specific case, the EEC is administered by the Center for Energy Economy and Environment of the Özyeğin University. An architectural firm, engineering firms, a construction company and several EU-based centers were involved in decision making processes.

Center for Energy, Environment and Economy